Masjid Ar-Razzaq celebrated its Tenth Annual Interfaith banquet: “Building Bridges of Humanity in a World of Many Faiths, a Reunion of the Human Family.” Under the leadership of Resident Imam John Ramadan, a student of Imam W. Deen Mohhamed and longtime local businessman founded Masjid Ar-Razzaq October 13, 2006. Masjid Ar-Razzaq has flourished over the last 11 years with Allah’s Grace and the support of its faithful believers.

This year’s celebration included over 125 guests and the commanding presence of G-d resulting in a spirit of peace, contentment, and joy for all in attendance. Ms. Naomi Worthy catered the plethora of delectable food! It was live streamed with over 1000 satellite viewers. The program was covered by Fran Farrer of The County News. The advertisement booklet was filled with well wishes and businesses from many faiths and walks of life a true reflection of what Interfaith represents. Interfaith work is extremely dear to Imam Ramadan. The panel was colorfully decorated with guest speakers such as: Rabbi Asher Knight of Temple Beth El of Jewish faith, Dr. Adrian Bird, Professor of Church History Union Presbyterian Seminary of the Christian faith, and Nabil Elias, Ph.D. of the Baha’i Community of Charlotte. This year’s keynote speaker Imam Yahya Abdullah, Resident Imam at Masjid Muhammed of Jacksonville Florida, was well received and delivered a powerful message in the wake of recent political, social and religious plights. Imam Abdullah’s topics were parallel with the theme of the banquet. He spoke eloquently about human beings of all races, religions, and classes helping each other in these recent dire times of need. He spoke to the G-d that lives inside us all. Imam Ramadan presented a posthumous award to the late Imam Ali Shah who was largely responsible for bringing Islam to Charlotte NC in the early 1960s. Imam Ramadan and Imam Ali Shah’s daughter 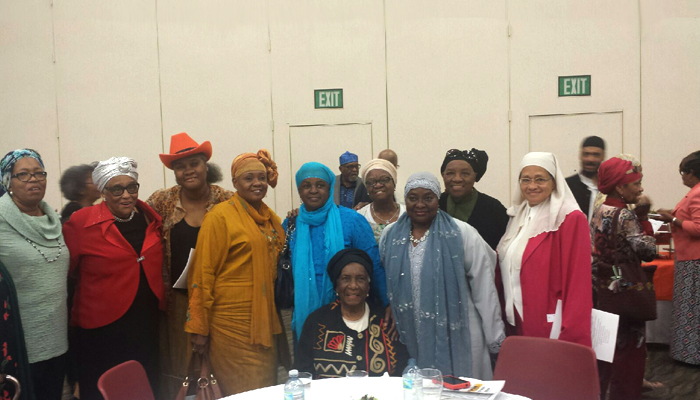 Aaliyah Shah penned a descriptive heartfelt piece that was published in the Muslim American’s September 2017 edition paying homage to the hard work and enlightenment for business, religion and family he brought to the forefront. The late Harry L. Jones, Sr. also was a recipient of the humanitarian award he was County manager of Mecklenburg County, NC for 13 years. Jones was active in many civic and professional organizations, published author and dear friend of Imam Ramadan for years. Harry L. Jones Sr. wife and daughter graciously accepted the award. Masjid Ar-Razzaq 2735 Royston Rd Charlotte, NC 704-393-7584 Jumuah Prayer- Fridays 1:30 pm visit us on Facebook @MasjidArRazzaq2006 for our Facebook Live Jumuah Prayer.

Scroll back to top