Part 2 of Why You Should Call People to Islam

As I mentioned last month, my training as a caller to the way of Islam really evolved while I worked in Saudi Arabia.  This month, God willing, I will explain why my time in Saudi Arabia helped me to become a Dawah Man so I could call people to Islam in the United States.

Being a Dawah man (someone who shares knowledge and calls others to Islam, also called a daee) is a passion and a dream. I am blessed to have the experiences and opportunities to learn more and to share Islam with others. To manty people, it would seem strange that you could become a dawah man in a country like Saudi Arabia which is a majority Muslim.  However, there are many people working in Saudi from all over the world.  This means there are Christians, Hindus and other religions represented in a typical Saudi workplace. 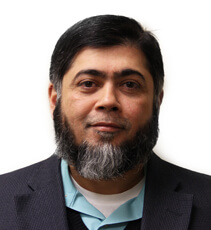 For someone like me, coming from Kerala in India; getting work in Saudi Arabia is a difficult but an achievable task. Once you’ve arrived on a work visa, is not easy to switch jobs. You are tied to an employer who is your Sponsor and he has a “leash” around your neck. Depending on the nature of the Sponsor, the length of the leash can vary; but there is no escape from it. He has the veto on many of your work related decisions. During my tenure in Jeddah, Saudi Arabia from 1990 to 1999, I had three different sponsors. The last one was Saudi Building Systems, owned by Juffali, a prominent family enterprise with more than a dozen different businesses under their name including kingdom-wide Mercedes dealerships. My company was a joint venture of Juffali and Butler Building Systems, a Kansas based steel building manufacturer. I worked in the computer department. My boss, Said-Sadain was a Filipino Muslim. I had two friendly peers both from the Philippines, Roni and Arthuro, who were both Catholic. During our free time, we always talked about Islam and Christianity. I always tried to call people to Islam as a Dawah man.

This was a much larger company compared to my previous two employer/sponsors. Most of the people in the chain of command were US citizens who imported the work ethics from America. This was a new and awesome experience for me. This American work ethic was visible in the friendly department managers and chiefs who would smile and say ‘Salaam’ to you, shake hands, and discuss things in polite and civil manners. I could raise my concerns with instructions and present my own reasoning and expect genuine attentive ears. This is not the case with many other businesses where the rule is “Listen and Obey!” I savored many other work place norms which we all love and enjoy today in the US. This environment helped me to become a better dawah man as the diversity and friendly conditions enabled me to discuss and debate faith matters with even the managers. Of course, they had the freedom to shoot me down as well; it was a fair game.

There were hundreds of computers and printers installed for engineers, accountants, sales teams, and other support staff. My job involved taking care of new computer installations, troubleshooting existing ones, training and little bit of computer programming.  Every day when I got to my office at 8:30 am, after switching on my pc and a little bit of housekeeping, I usually grabbed my cup and took a brisk walk to the kitchen/pantry where we had a variety of coffee and tea. Sometimes I met managers and other staff and we shared few moments of discussing the headline news of the day. It was a three minute walk to the kitchen, half-way there was a glass cabin with a window which was the office of Arnold, a passionate Catholic from Philippines. “Kumustaka?” I always asked him in Tagalog. He was a friendly guy and I debated the most with him. I often stood outside his glass cabin and he would debate through the window. Occasionally the debate would be about why the Trinity does not make sense and He would counter with his problems with Islam and why Trinity makes perfect sense. Neither I nor he would give up. When it would go nowhere, I would just say “OK, talk to you later” and then got back to work. This interaction with a devout Catholic was essential in my growth and development as a dawah man.

The purchase manager, Mr. Akhtar Ali from Islamabad, Pakistan was like an elder brother for me. We do a lot of “Gub-Shub” as he calls it, the familiar expression in his Punjabi tongue for Chit-Chat. His office was upstairs on one side of a huge hall filled with engineers and technicians working on AutoCAD and other engineering and designing tasks. As there were various types of equipment upstairs, that is where I went the most. When I would be upstairs, usually I stopped by Mr.Ali’s office. Our discussions had no boundaries, religion, politics, bureaucracy in the office, and investment back home were all discussed. Our discussion at times spills in to family and personal matters such as the education of our children and also seeking better jobs. I constantly dreamed of working in the US. He agreed that the US would be a better working environment for my degree in computer engineering.

I worked in SBS for almost two years. I knew most people and they knew me for the character of talking about Islam. I never passed by an opportunity to talk with any non-Muslim friends without initiating some kind of a discussion on Islam. If the guy was receptive, I would make a second trip and give him one of the brochures or books I picked from the Call and Guidance office.  As many of you may know, throughout Saudi Arabia there are many offices which have been established by the Ministry of Islamic Affairs to provide Islamic literature to the many non-Muslims who travel for business and leisure in Saudi Arabia as well as the millions of non-Muslim workers that live in Saudi Arabia on a temporary basis.

My office was situated in a corner towards the “dead end” area of the building. Beyond my office were the prayer room and then the rest rooms. During office hours we prayed at least twice for Dhuhr and Asr. People would regularly stop by my office to say Hello and Salaam. One of the managers, Raghu, was also from Kerala. He headed the Mechanical Engineering department and he was a Hindu. Since He spoke my native language, Malayalam, we both were like friends. That is, until I would initiate a discussion on Islam. I would try out my skills as a dawah man and bring up the fact that in the Hindu Vedas and puranas you can see verses that indicate the coming of Prophet Muhammad (SAWS) and commandments that prohibit people from worshiping anyone other than the one true God Almighty. He would listen patiently and then He would strongly refute all what I said. His argument was, “You cannot quote me from my books and then tell me that my books are obsolete.” He and I continued discussing throughout my two years and the same refuting arguments would pop up.

One day in May 1999 as I reached office a few minutes late, I got a call from Mr. Akhtar Ali. He told me that he had something important for me and asked me to get my cup of tea and see him in his office upstairs. He greeted me with a big smile and as I was sitting down in the visitor’s chair opposite to him, he pulled out a copy of the Arab News English Daily newspaper from his drawer. The newspaper had been folded to show me an advertisement seeking applicants for a computer analyst position in USA which was placed by a company based in Dubai. As I was reading it, I thought “I am fit for these requirements!” I handed the newspaper back to him. He got up with it, made a photocopy and gave it to me. “You should apply” he encouraged and I nodded agreeably.

A few days later the application package was completed and mailed to Dubai. After about two weeks I got a letter from them asking me to appear for a programming test at the Jeddah Marriott hotel which was not far from where I lived. By the grace of Allah, the test was done well and I became hopeful that I would get this position in the USA. A few weeks passed and I heard nothing from them, after about a month I called their Dubai office to check on the status. I was told that I have to attend an interview and we set a date. I started preparing for the interview, I bought a new suit and a briefcase so I could appear in style, which I did.  The interviewer was pleased with the way I handled his queries. He gave me a decent offer and I readily accepted and was told to expect the visa to USA in about a month. My goal of reaching the USA was becoming a reality!

I started the resignation procedures at SBS. Finally that day came when I was formally being relived from my duties. My boss Said-Sadain, SBS Chief Hassan Bassoun, and Mr.Akhtar Ali were present at my send-off.  They all spoke a few words of gratitude and wished me good luck. I also spoke a few words thanking every one especially my boss Said-Sadain, who was a gentleman. I drove back home that day with my mind occupied with the USA, the next country I am going to work. Within a few days I packed my belongings and left Saudi Arabia with my wife, Thafseera, and our two kids, Nabeel and Nadeem, to my home in Kerala, India where I started the countdown of waiting for the US Visa. I continued looking forward to becoming a dawah man in the United States.

How they learn in a special way